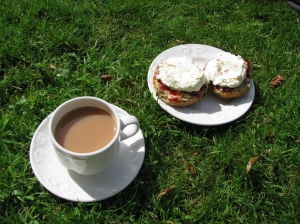 Even the most enduring of traditions are made – and not just by you and me. The sigh of hot liquid pouring out of the kettle, the lazy swirls of color enveloping its depths, the weight of a small spoon and its echoes as it fuses flavors. These small movements, their eddies and flows, are embedded seamlessly in everyday lives today, but only by virtue of the circulations and travel of generations.

My first experience drinking tea was anything but a success. A young girl of probably ten, I had been invited by my best friend and her mother to visit the matter-of-factly named ‘Quality Tea Rooms’ for an afternoon of civilized adulthood. Yet, as I soon found out, it’s awfully hard to be a civilized adult when the taste of black tea imprints a sour grimace upon one’s face. Copious amounts of sugar improved the situation, but nonetheless traces of the grimace remained. From that point on, I became a staunchly reluctant tea drinker – even milder herbal teas were reserved for bouts of illness when they might keep the company of an already present grimace. Though I had a more amicable relationship with yum5 chaa4, drinking green teas alongside Cantonese dim2 sum1, even this ritual was an exceptional presence in my daily life.

It was only upon moving to Britain that my relationship with tea began to change. I quickly discovered that the cultural importance of tea was not to be taken lightly. While in North America having a ‘brew’ referred to drinking beer, British colleagues would make a brew (of tea) in the middle of the day, and the biscuits could never be far away. Tea is part of the British infrastructure – shaping the rhythms of days, as well as fitting in alongside the stone houses and their never-quite-sufficient heaters. As they say, ‘when in Rome…’ and having a cuppa slowly insinuated itself into my days.

But it wasn’t until reading Sarah Rose’s popular historical nonfiction For all the tea in China (2010: Viking Penguin) that I fully appreciated the connections between my tea drinking and my research. I have looked at how people’s leisure travel reflects and reproduces patterns of circulation that go back for generations – with hikers visiting places made popular by railways and writers, and Ashtanga yogis retracing the steps of their teachers to the home of their practice.* Yet as Rose shows, historical patterns of travel and trade are also inseparable from the British relationship with tea.

For nearly two hundred years the East India Company sold opium to China and bought tea with the proceeds. China, in turn, bought opium from British traders out of India and paid for the drug with the silver profits from tea.

The opium-for-tea exchange was not merely profitable to England but had become an indispensable element of the economy. Nearly £1 in every £10 sterling collected by the government came from taxes on the import and sale of tea—about a pound per person per year. (p.1-2)

After the First Opium War in the mid-19th Century, strategists in the City of London decided that cultivating tea in India would help to reduce dependence upon China for tea and guard against changes in Chinese policies on opium. While the climate was favorable in India, the British had little with which to start such an enterprise.

If the manufacture of tea in India was to be successful, Britain would need healthy specimens of the finest tea plants, seeds by the thousand, and the centuries-old knowledge of accomplished Chinese tea manufacturers. The task required a plant hunter, a gardener, a thief, a spy. (p.5)

The majority of Rose’s story thus follows the man tasked with what she recognizes would be called corporate espionage today – Robert Fortune. His covert travels into China to find both plants and knowledge led to significant discoveries that have changed how and where tea and tea-drinking circulate. For instance, on his travels Fortune observes poisonous chemicals being added to green tea in order to make its color more vivid, and the unveiling of this revelation “at the Great Exhibition of 1851 marked a turning point: Britons now wanted their tea black and only black” (p.240). The taste for black tea was further supported by the British colonies’ production of sugar: “Britain had a glut of sugar, and tea gave Britain somewhere to dump it” (p.234). The circulation of knowledge about what may not have even been a widespread use of chemical coloring in this way joined up with other already-circulating commodities to make black tea the ‘bog standard’ cuppa today.**

For all the tea in China also tells of cultural negotiations, botanical discoveries, the early trials of Indian tea cultivation, and how the travel of tea across oceans was both thwarted and hastened by the complexities and new developments of sailing ships. It offers an intriguing picture of how important commodities both depend upon and develop people’s everyday rituals, and leads me to wonder which of today’s global commodity flows have the same capacity to strategically shape geopolitical relations and daily lives in the future.

*See my chapter in the forthcoming 2013 edited collection Sustainable practices edited by Elizabeth Shove and Nicola Spurling from Routledge.

**The corresponding lack of knowledge circulation regarding varieties of green tea can be seen in the limited linguistic resources English speakers have for discussing it. While some people may be able to distinguish jasmine or white tea from generic ‘green’ tea, many of the varieties available in even standard dim2 sum1 restaurants in Hong Kong have no English names, or only little-used English translations.